We’ve been so fortunate to live in so many beautiful places around the world. Now, we’re sitting back and reflecting on our experiences in Sydney, the Okanagan, Phnom Penh, Toronto, and of course today, living in Vancouver.

We fell in love with Vancouver and we both kind of call Vancouver home, although we’re not living there right now. When you live in a city for long enough, it starts to become a little bit tainted. That said, as we’ve mentioned before and will continue to mention, we feel so lucky to have lived in all of these places – and without a doubt, Vancouver is an amazing place to live.

We’re going to reflect on what we absolutely love about living in Vancouver, and mention some of the cons too. So let’s get into it.

If you’re planning on moving to Vancouver, you’re in the right place.  Let’s start about talking about the obvious (and not so obvious) perks and downsides about living in this gorgeous coastal city.

It is a playground for people who love the outdoorsYou have the mountains and the ocean. If you want to ski surf, cycle, skateboard, basically do anything, you can pretty much do any outdoor hobby in Vancouver.

The quality of life in Canada is top notch 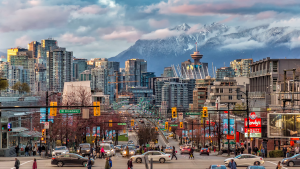 Vancouver is a very diverse city with plenty of diverse cuisines

Vancouver is generally a very accepting place. A lot of  diverse culture brings in a lot of diverse food, which is a massive benefit of being able to live there.

Particularly, Vancouver has some of the best sushi in the entire world, which we happen to love. Yep, the rumours are true. If you love sushi you’re going to love Vancouver. But let’s not forget about all of the other amazing cuisines Vancouver has to offer.

Vancouver is a very outdoorsy city. If you’re an outdoorsy person, you love to go on hikes, spend time in the oceans, spend time at the beach, go skiing, snowboarding, any of that, hands down you’re absolutely going to love Vancouver. 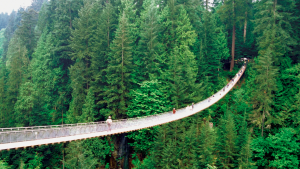 …but this is where our first ‘con’ comes in…

All that said, if you’re not really an outdoorsy person, that’s ok! Hey, some people aren’t. If you’re a total city slicker, it’s not that Vancouver doesn’t have that to offer for you. You’ll definitely be able to find your little pockets of the city, but it really is so outdoor-oriented, you might feel like a little bit of a fish out of the water because the people of Vancouver love their nature. It’s just the culture.

What’s your cup of tea?

There are nine beautiful beaches in Vancouver

Take your pick & you won’t be disappointed.

…but something to remember…

It’s rare that the temperature will soar any higher than 25°C (77°F), so if you’re coming from a hot country, you’ll have some climate adjusting to do.

There’s no beating around the bush. It’s really not a good city for minimum wage workers. You’re going to want to try to find a job that pays higher than minimum wage.

Hey, you can make it work.  People make it work in Vancouver all the time. We sure did as young, broke 20-something’s back in the day. The truth is, minimum wage in BC isn’t that high. We’re not trying to rain on your parade, but this is the reality of living in Vancouver.

If you want a positive spin on this it’s that there are a lot of free things to do in Vancouver, such as going to the beach or things that we mentioned earlier. But if you’re a skier during ski season, it’s expensive.

C’mon, you get what you pay for. It’s absolutely beautiful and there’s so much to do, but we’re not going to sit here and lie to you and say that it’s super affordable because it just simply is not. 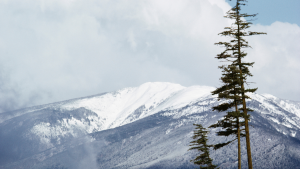 Come with savings & a plan

If you’re coming with money in your pocket & a solid plan, you’re good to go.

The accessibility to the rest of beautiful British Columbia

British Columbia, as a province, is just absolutely amazing. When you move to Vancouver, you don’t only get Vancouver, you also get Squamish and Kelowna and Whistler, which a lot of people are attracted to as well.

You can go from being right in the heart of the city on Granville Street downtown, and you can drive an hour outside of that and you have a beautiful camping spot right on the river, mountains, completely isolated. There are endless opportunities for day trips.

Vancouver is a really beautiful place. We cannot deny it. You’ll have to see for yourself.

If you have any questions about moving to Vancouver or Canada in general, come hang out with us over on our Instagram @nickandraychel and we’ll be happy to chat.

Exploring the world through your screen? Make sure to check out our other articles about cities we’ve lived in!

or 8 thing you need to know before moving to Cambodia